I&R is exceptionally popular in Alabama as across the union.  On June 3, 2010, 500 likely voters in each state were asked “In 26 states, citizens can sign a petition to put laws or constituional amendments on the ballot to be decided by the voters at a statewide election.  This process is known as initiave and referendum.  Would you favor or oppose the initiative and referendum process in your state?”   The national average was 67% in favor whereas Alabama bested the national average by 4 points as clearly shown in the below graph. Old or young, rich or poor, and marital status with or without children were all above 50%, less two, and majority above 60% in favor. 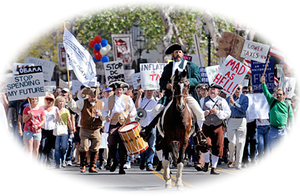 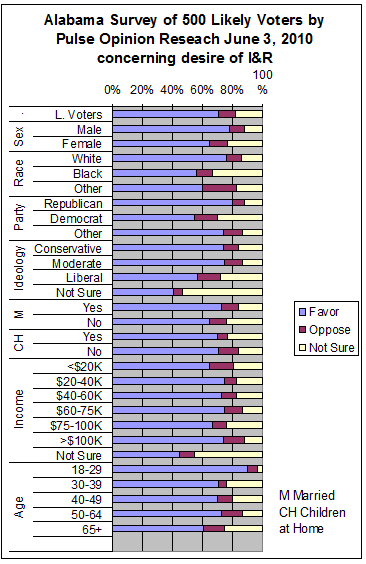 I&R has been before our legislature nearly 13 times over the last 15 sessions and never once seeing a floor debate or vote.  “Initiative and Referendum” was mentioned during our 1901 Alabama Constitution Convention and the legistures have failed us for 116 years.

I&R will break the monopoloy our legislature has on each of us by not providing constitutional amendments for Common Core, Recall, Term Limits, Education Reform, Government Reform, Fair Ballot Access for independent and minor party candidates. Former Lt. Governor Steve Windom told me in 2016 I&R is necessary for Recall.

A poor example of good government exists when citizens are ignored while our government knows citizens in 26 states and the District of Columbia  and 17 of the 20 largest US cities, while several in states without I&R, such as Birmingham,  have a form of I&R – not Alabama statewide. Not a foreign concept to our state government because the concept has been on our U.S. soil since 1600’s. President Teddy Roosevelt, speaking in Columbus, Ohio on February 21, 1912 spoke,